Akpabio Collected N500m For NDDC Projects, Did Nothing – Senate Committee

The senate committee on Niger Delta has said Godswill Akpabio, Minister of Niger Delta Affairs, got N500 million contracts from the Niger Delta Development Commission (NDDC) in 2017 for some contacts but did not implement them.

According to the committee, chaired by Peter Nwaoboshi, the contracts are  for the fencing of Federal Polytechnic Ukana, Akwa Ibom, (N200 million), and Federal Government College, Ikot Ekpene (N100 million), N150 million for entrepreneurship training on use of modern farming implements for youths and women of Akwa Ibom North-West Senatorial District while N50 million was earmarked for the renovation of a hostel at University of Nigeria, Nsukka, Enugu State.

The monies were collected when Akpabio was senator representing Akwa Ibom North in the National Assembly. 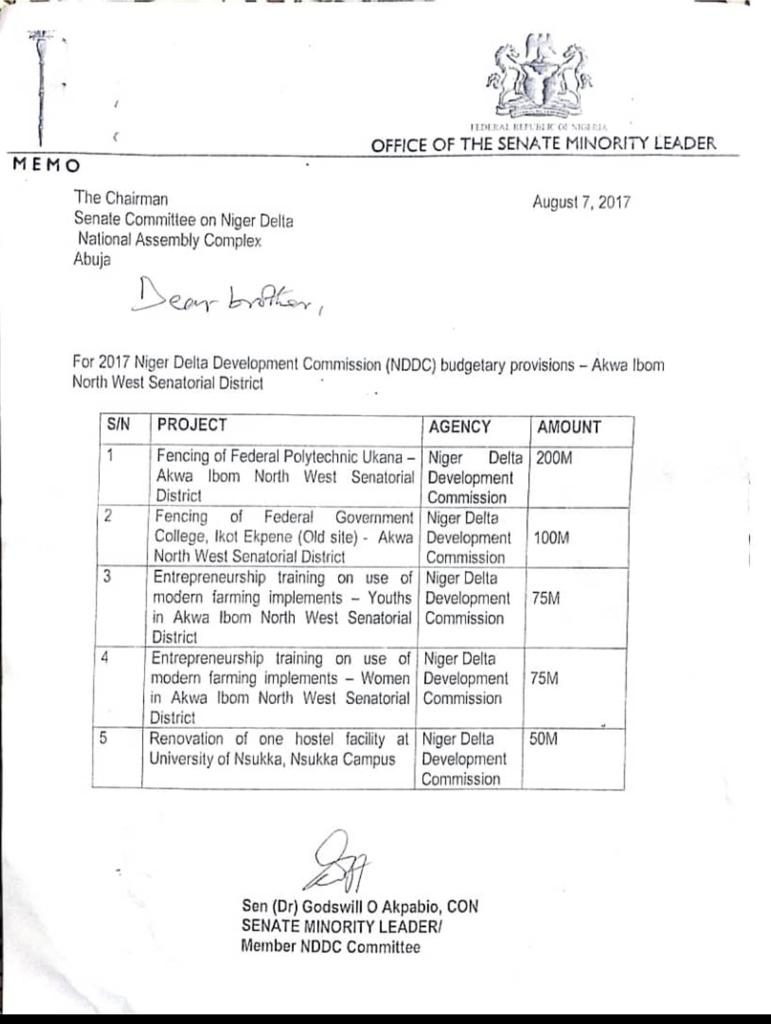 Nwaobosho told journalists on Wednesday that the contracts were fully paid for but there was nothing to show for it.

“Findings show that while there was no physical evidence of implementation of these projects, checks show contracts were awarded and fully paid for,” Nwaoboshi said.

“Such practices have turned the region to sites of abandoned projects.”

Akpabio had lamented that the NDDC has become known for abandoned projects, saying some politicians had turned it into their ATM.

He said people had hindered the commission from working, adding that they come with different ideas to make some money for themselves.

After President Muhammadu Buhari ordered a forensic audit of the operations of the NDDC from its inception in 2001 to 2019, the Senate raised a panel to probe an alleged mismanagement of N40 billion.

He has since said the document released by Nwaoboshi was a recommendation for zonal intervention projects as requested by the leadership of the senate.

Previous Stay Away From Edo APC Primary, Obaseki Tells Oshiomhole
Next Masari Dumps Negotiation, To Use Force Against Bandits

COVID-19 May Spread Through Air – NCDC

The Attorney-General of the Federation and Minister of Justice, Abubakar Malami (SAN) has asked Sahara …